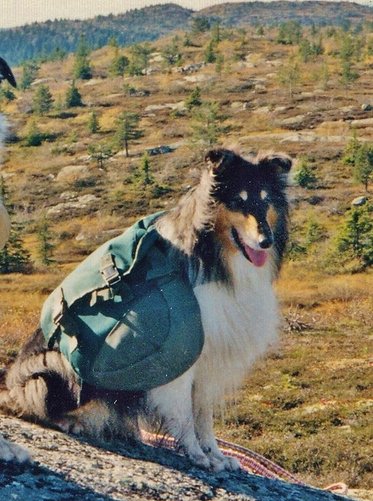 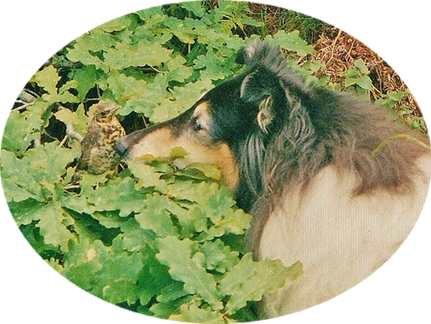 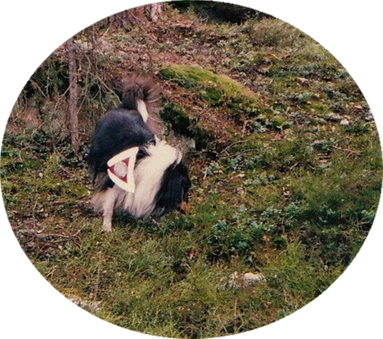 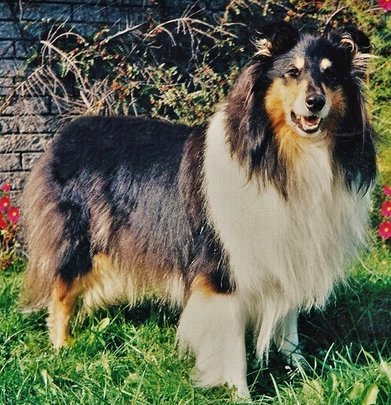 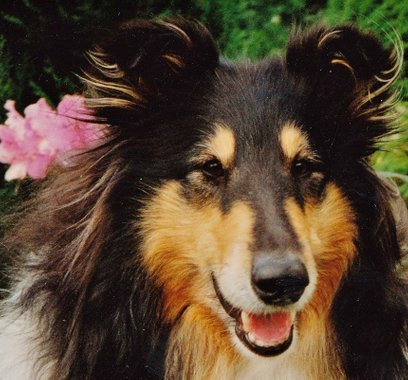 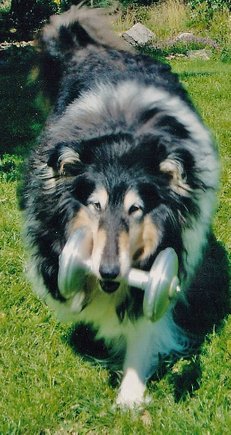 My second Collie was born In 1993 March 13. a hurricane, that got the name Chesseva’s Classic Charming Sammie, she was one in a litter of 6. Her breeder was Eva.

My goodness what a puppy Sammie was, I think a name like firecracker is describing her very well.. She was so full of energy that she nearly bobbled over and loved to do absolutely everything. She was a born working dog, and she start to train obedience as soon as I got her. She showed a great interest in our hens and was allowed to round them up and take them in every evening from she was a few

Six months young she started her training to be a SAR dog, she loved

to search for people and objects. Sammie was born with both brain and

beauty, she had a “go and motor” you don’t find often, if you find it at

all. She was totally gun-secure, a tough girl and not afraid of anything.

She was also extremely independent, and often thought she knew best.

Sammie was very dominant and also playful and nosy, she always had to

investigate things. When we was training SAR and she had to wait for

that task extremely seriously and heaven help the person who wanted

to take some of our  equipment if she guarded it.

In time, she would also be Norway’s Most Versatile Meritated Collie (meritated in both sar, tracking, search, obedience (Elite-champion), conformation (also a champion), herding, approved mentality and working disposition test).

After training obedience for some months we started in her

first competition 9 months, her debut resulted in a 1.prize and

approval to class 2. Sammie was four years young when she was

an Elite-Obedience-Champion. She soon won many competitions,

has been Club-champion in obedience and also in working class

(tracking) and several other good placements.

We was also automatic a member of our breed club’s local-branch,

Telemark/Vestfold.  They had a prize to the Collie from

Telemark/Vestfold who had the best results from competitions

during a whole year. I think Sammie won about three times/three

years in a row, then they changed the rules.  It was not enough to

do well and win at competitions, you also had to attend some of

their meetings, at least one.

meetings, drive to Skien to listen a couple of hours and then drive

home (80 km x 2) – and a couple of hours in the car). We never attended again. Of course the rules has to change, maybe they couldn’t bear the thought of Sammie winning and winning.

She has been Collie of The Year in Obedience at our main breed club every year in different classes (from 1 to Elite) from 1994 and till 2005, except for the year 1996.

Sammie was also a born mother and took care of her three boys, Wim, Sheppegutt and Yuppie in an outstanding way. Her boys grew up to be fantastic adults and young men. Wim and Yuppie went to some superb families in Sweden.  I also sold Sheppegutt, but thank God I was able to buy him back again when he was about two  years young – he was then abused, with a broken tooth, broken toe, extremely afraid (especially of men) full of scabs on the body after having been bitten and terrible thin.  More info on his page (Sheppegutt).

Unfortunately Sammie did only get one litter.

What’s hilarious is that Swedish people blamed Sammie for making Swedish Collie-males sterile.  I was not sure if I should write this but since I am fed up with slander about my Collies I do.  I have not revealed the name of the Collie or his owner though (yet).

I travelled to western part of Sweden to mate Sammie with a lovely male.  We had been there some days, but this male didn’t dare to try to mate her.  We therefor went to a veterinarian to check his sperm.  According to this veterinarian there was not one single sperm – this male was totally sterile. We also saw that in the microscope, not one single “swimmer”.  Yes, he was lent out AFTER we had been there, but he never had any offspring’s – strange ? no.  It didn’t take long before I heard, and the rumors was  – “Sammie made this male sterile”.  Bullshit – he never dared to try to mate Sammie and he was sterile according to the veterinarian.

It’s no doubt about that Sammie was extremely dominant – but to make Swedish Collie-male sterile just by looking at them, well………

Sammie did have one tiny flaw – and that was when she competed in obedience – she had to “speak”.  I have no idea how many points we lost in competitions because she “whistled” and “talked”.

I do remember once, the competition was finished and it was time for  the awards ceremony (and yes Sammie had as usual “talked and whistled” during her moments. When we was called for our award, the judge said he thought it was unbelievable to hear Sammie “whistle like she was two persons”. And how did she do – she won.

She could in fact also “talk” with her mouth closed – very special.

Sammie did very well in everything she attended, and here are a few of

Winner of The Red Prize in Obedience

Winner of The Red Prize in Conformation

She was an excellent herder, and have approved herding-test.

2 x BOB vet and 1 BIG3-veteran, and several other good placements

She is a conformation champion in both NKK and NHL

She got her third challenge certificate and her championship in conformation

of the Judge Andrew Brace in 1999, he also rewarded her with a BOB.

This is what Andrew Brace said about her : Six yr. Tri-color of excellent

up + down. Excellent tail carriage. She moves so well and so correct I am

surprised she’s not a champion.

Sammie  is the image of what I consider a perfect Collie – her superb mentality, her good health, her fantastic conformation and her outstanding love for working. And in addition to this a fabulous companion – is it possible to ask for more – no I don’t think so.

Due to her veterinarian Berge/Nordberg Animal-clinic that didn’t knew side-effects from the drug Rimadyl, my Sammie was killed January 17 2006 (here is her story) near her 13th birthday.  She only had a swollen shoulder (after rough playing) and got Rimadyl, of course in hindsight I should not have taken her to the veterinarian, she would have been fine after some “bedrest”, instead she bled to death.

Her offspring is carrying on her legacy, and I am proud to say we can find them all over the world,  Norway, Sweden, Finland, Great Britain, Denmark, and Australia

Thank you so much to breeder Eva Elvsaas for letting me have this fantastic female and for your interest through the years, that meant a lot. I was so grateful for the opportunity to buy Sammie.

She is waiting for me at Rainbow Bridge, and in the meantime she is playing with Samantha, Sheppegutt and Little Heike-mother 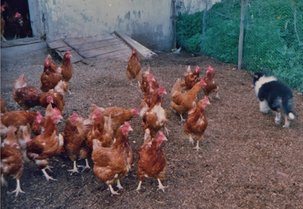 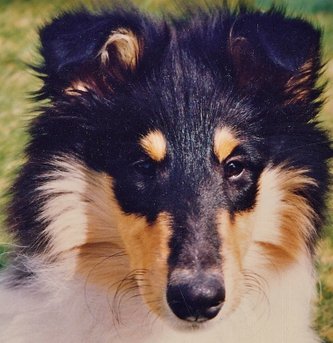 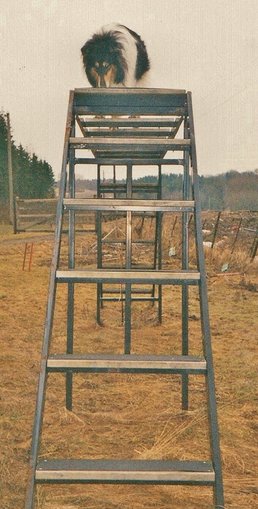 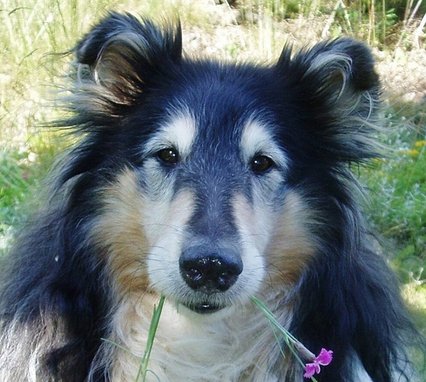 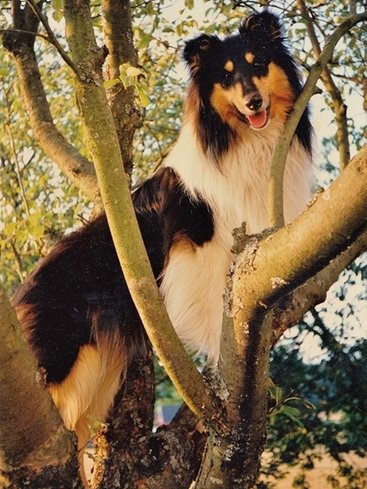 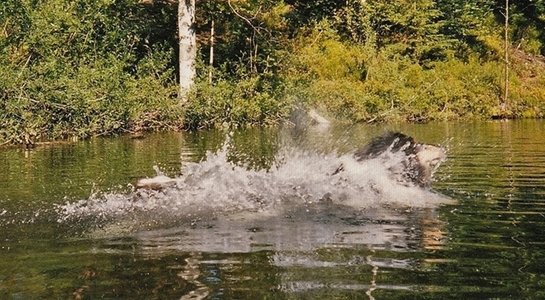 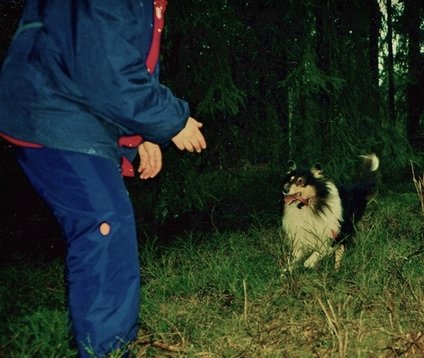 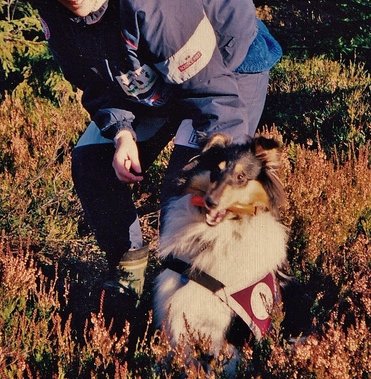 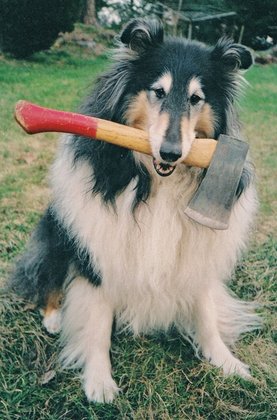 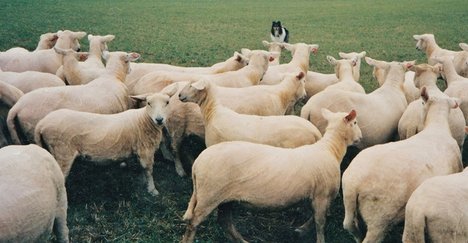 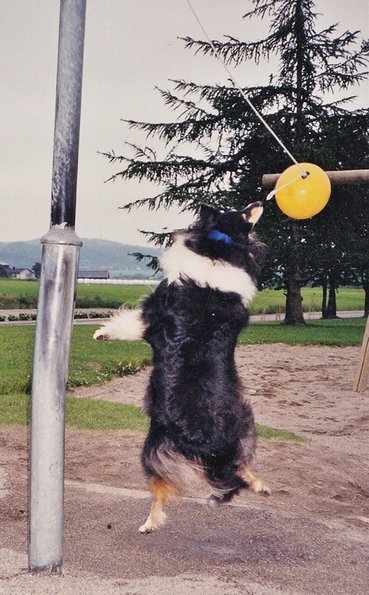 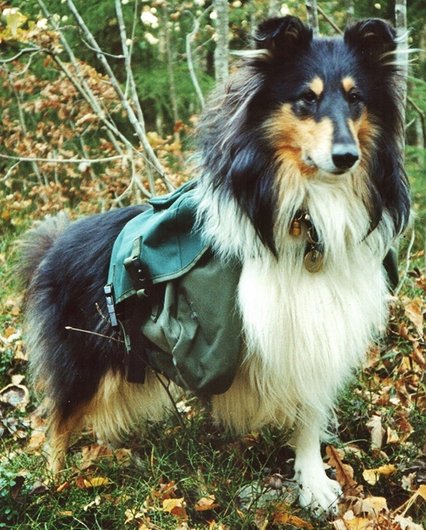 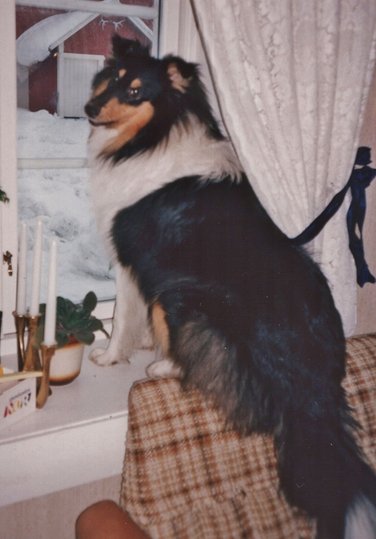 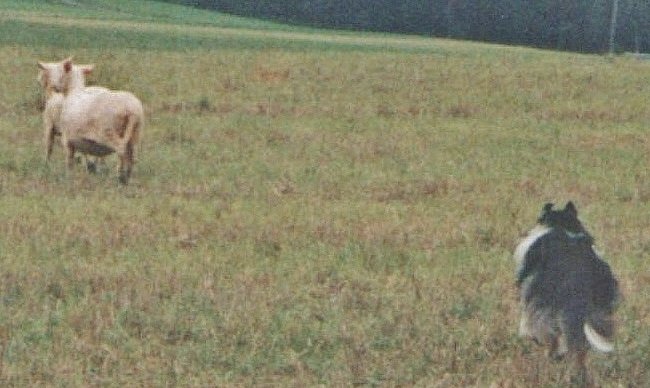 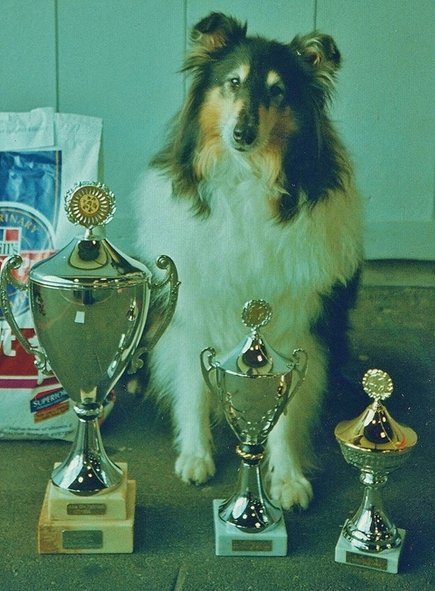 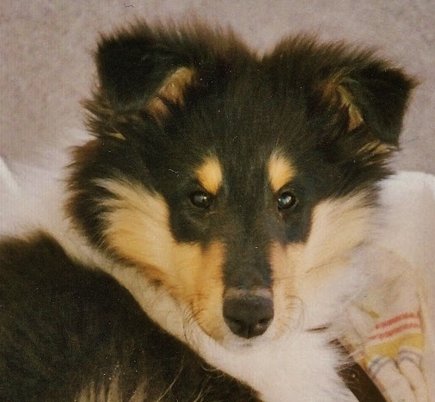 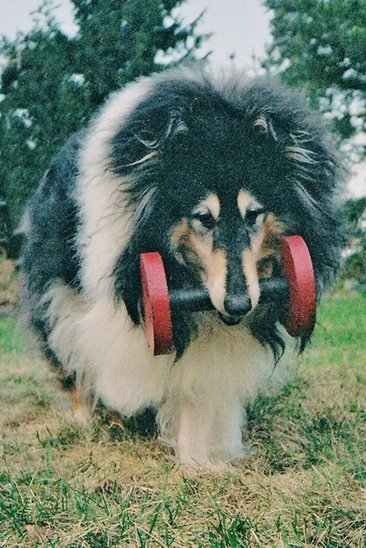 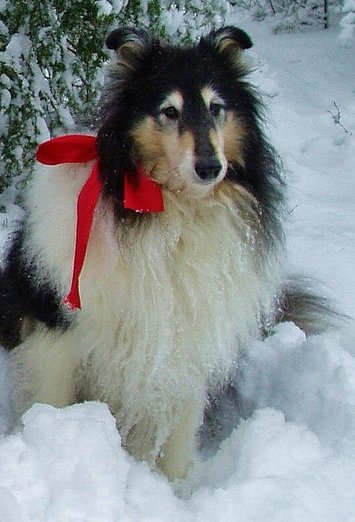 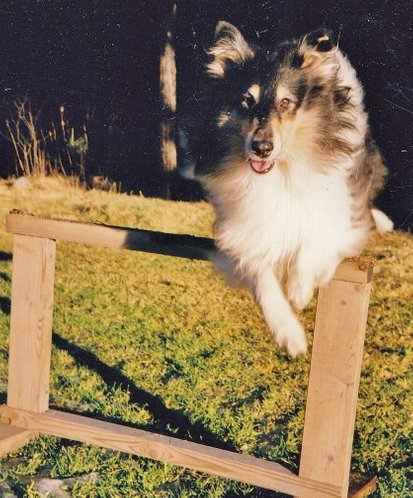 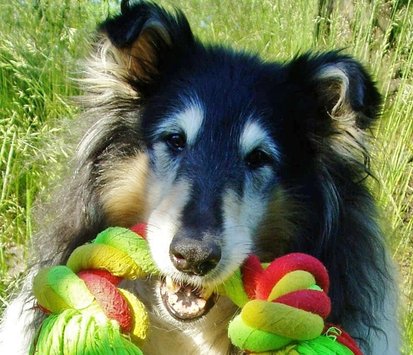 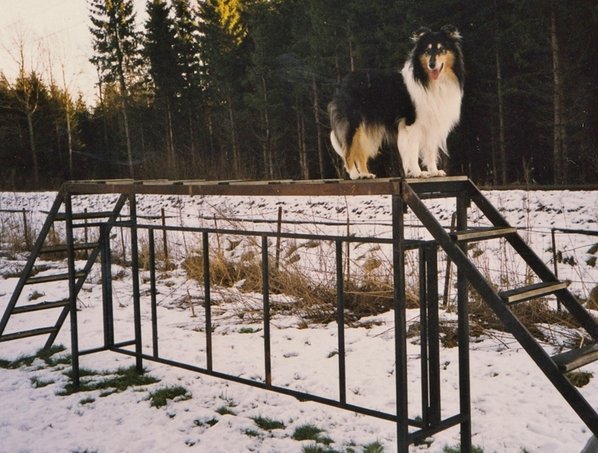 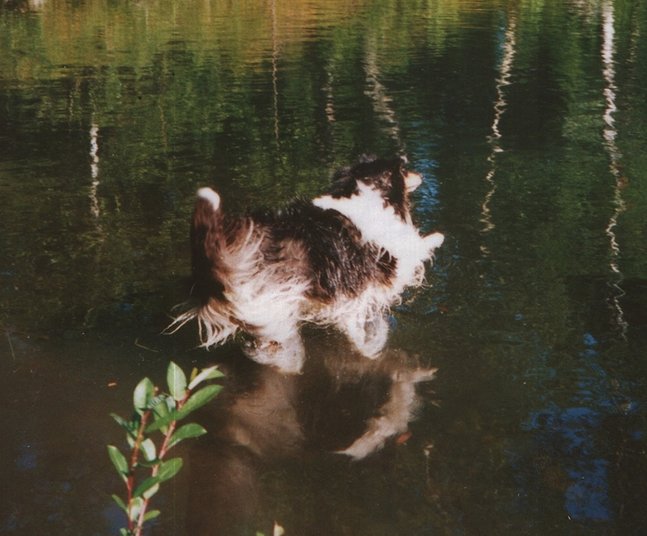 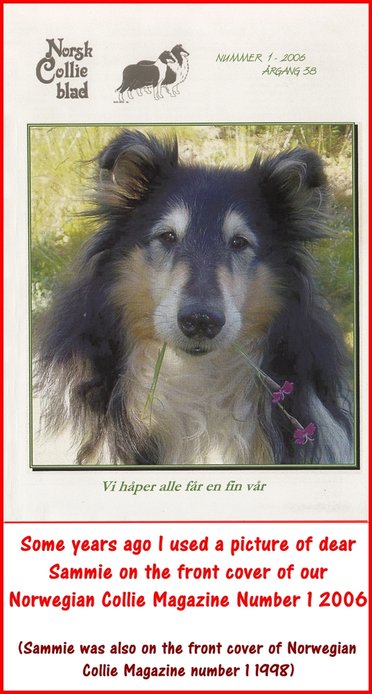 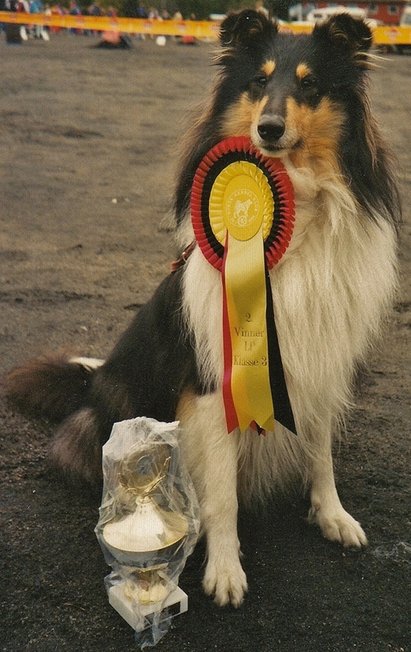