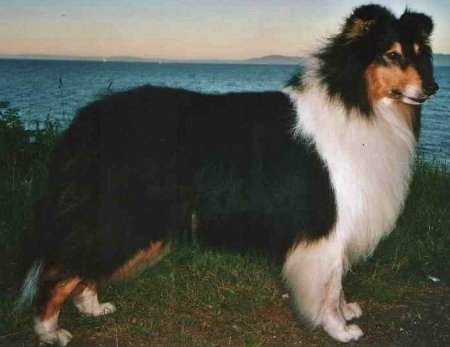 The Rough Collie is the same as the Smooth Collie with the exception of coat length. The breed is thought to have evolved from dogs brought originally to Scotland by the Romans as far back as 50 BC which then mated with native types.

Purists may point to subtle differences which have appeared as individual breeders selected stock for future breeding, but the fact remains that the two breeds derived very recently from the same stock and, in truth, share lines which can be found in common to this day.

The Rough Collie is, of course, the somewhat refined version of the original working collie of the Scottish shepherd, fro, which it has been selected over at least a hundred years. As a result we now see a glamorous show dog which draws applause because of his aesthetic appearance, in the same way that his working cousin thrills audiences in the competitive obedience ring.

This is not to suggest that the work of the pedigree breeder has made the Rough Collie the equivalent of the human "dumb blonde". Far from it: many of the breed can perform satisfactorily, offered the chance, and it is as well for owners to remember the "origin of the species" when taking their companions across farmland and hillside; all too easily the quiet pet can prick up his ears at the sight of a grazing flock with disastrous results as the old instincts take charge. The basic message is that for all his beauty, the Collie is a worker and must never be dismissed as "just a pretty face".

The coat does not look glamorous as a result of negligence; grooming is hard work, but that work is very rewarding. Surprisingly enough the Rough Collie does not seem to demand vast amounts of exercise, but care must be taken to stop him from putting on too much weight.

The working Rough Collie needs a working award before he can be crowned Champion rather than Show Champion.

Appears as a dog of great beauty, standing with impassive dignity, with no part out of proportion to the whole.

Physical structure on lines of strength and activity, free from cloddiness and with no trace of coarseness. Expression is most important. In considering relative values it is obtained by perfect balance and combination of skull and foreface, size, shape, colour and placement of eyes, correct position and carriage of ears.

Friendly disposition, with no trace of nervousness or aggressiveness.

Head properties are of great importance, must be considered in proportion to the size of the dog. Viewed from front or side, the head resembles a well-blunted clean wedge, being smooth in outline. Skulls flat. Sides taper gradually and smoothly from ears to end of black nose, without prominent cheek- bones or pinched muzzle. Viewed in profile, top of skull and top of muzzle lie in two parallel straight lines of equal length divided by a slight, but perceptible stop or break. A mid-point between inside corner of the eyes [which is centre of a correctly placed stop] is centre of balance in length of head. End of smooth, well-rounded muzzle blunt, never square. Under-jaw strong, clean cut. Depth of skull from brow to underpart of jaw never excessive [deep through]. Nose always black.

Very important feature giving sweet expression. Medium size [never very small], set somewhat obliquely, of almond shape and dark brown colour, except in the case of blue merles when eyes are frequently [one or both or part of one or both] blue or blue flecked. Expression full of intelligence, with quick, alert look when listening.

Small, not too close together on top of skull, not too far apart. In repose carried thrown back, but on alert brought forward and carried semi-erect, that is, with approximately two-thirds of ear standing erect, top third tipping forward naturally, below horizontal.

Shoulders sloping and well angulated. Forelegs straight and muscular, neither in nor out at the elbows, with moderate amount of round bone.

Hind legs muscular at thighs, clean and sinewy below, with well bent stifles. Hocks well let down and powerful.Feet oval

Long with bone reaching at least to hock joint. Carried low when quiet but with slight upward swirl at tip. May be gaily carried when excited but never over back.

Distinctly characteristic in this breed. A sound dog is never out at the elbow, yet moves with front feet comparatively close together. Plaiting, crossing or rolling are highly undesirable. Hind legs from hock joint to ground when viewed from rear to be parallel but not too close; when viewed from side, action is smooth. Hind legs powerful with plenty of drive. A reasonably long stride is desirable and should be light and appear effortless.

All should carry typical white Collie markings to a greater or lesser degree. The following markings are favourable – white collar, full or part, white shirt, legs and feet, white tail tip. A blaze may be carried om muzzle or skull, or both.

Any departure from the foregoing points should be considered a fault and the seriousness with which the fault should be regarded should be in exact proportion to its degree and its effect upon the health and welfare of the dog. 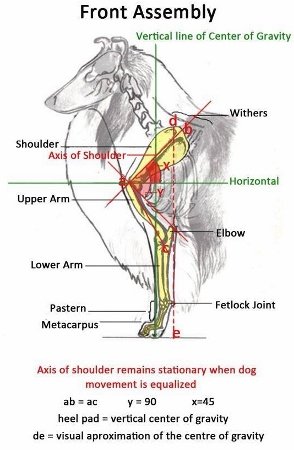 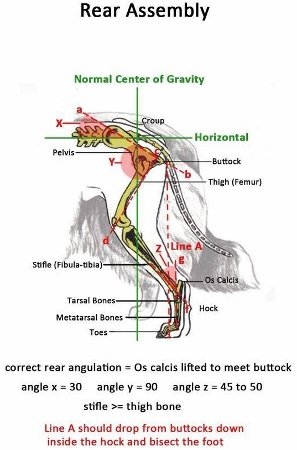