The pictures shows my Little Heike-mother on her test

Who would benefit from such a description?

* Breeder - when he/she shall choose breedingmaterials

* Puppybuyer - for an opinion on the puppyparents mental status before choosing a puppy.

* Dogowner - when the dog is going to specialize in different work

* Society - mentaldescription is a guarantee for quality breeding

The dogs mentality is described through different situations, like curiosity, collaboration, interest, fear etc. And the dogs reactions are described in a scale.

Who describe the dog ?

He/she is called MH-test functionaries, and they have at least 60 hours of education behind them, and have been to a certain number of tests

The MH functionary can stop the test if the dog is negatively influenced.

How shall the dogowner behave ?

As a dogowner it is exciting to get the dog tested. It's no need to be nervous as it is the dogs behavior that's judged.

The dogs has to be tatooed or chipped.

The dog owner can also, if he/she wants it stop the test at any time if he/she feel that the dog can't handle it.

1. Contactability with strangers. The test leader takes the dog from handler and walks away. Then manhandles the dog checking out fur and body structure pretty much the same way as does a judge in dog exhibitions. The dog must also show its teeth.

It is desirable that the dog is neither too much on guard nor excessively fawning and that it is capable of collaboration with other humans. 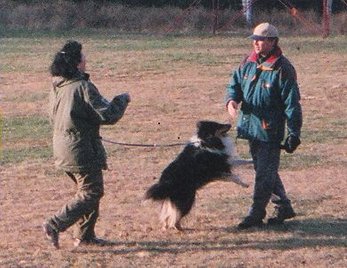 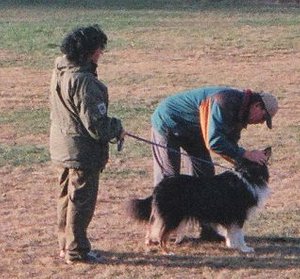 2.The dog's play behavior. Unleashed dog. Tug-of-war-play with a rug. 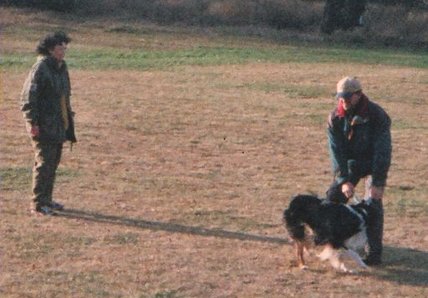 4. The dog's ability to relax:. Standing still during 3 minute's silence. It is desirable that the dog is able to relax

5. Distant play. The dogs willingness to make contact with a stranger at a distance and collaborate with a stranger. A "whitch" comes out of the woods at about 40 meters distance. The witch unmasks herself and hides behind a bush, taks to the dog and invites it to play. This phase measures the dog's curiosity and willingness ti leave its handler/owner and willingness by itself to invite a stranger to play.

7. The dog's noise sensitivity. A rather heavy metal chain is pulled over corrugated plate hidden in a shrubbery, the so-called "rattle". It is desirable that the dog should not be over-sensitive to noise

8. The dog's reaction to approaching threat. Ghosts - two figurants clad in white sheets with white buckets on their heads, on the buckets there are huge black eyes and teeth painted on. The ghosts stride slowly forwards in a stereotype manner in order not to move like human beings. The wind must be off the dog to prevent it from sensing the humans scent. At a distance of about 3 meters the ghost turn their back to the dog. Finally the handler is allowed to say the dogs name, talk to the ghosts and unmask them 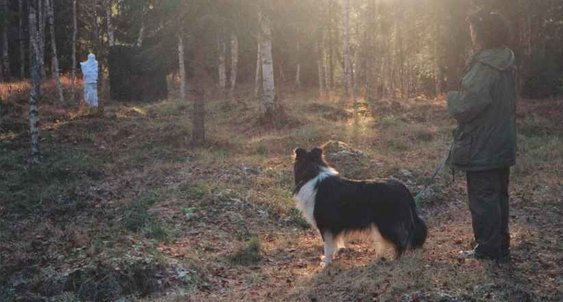 9. The dog's possible change in playing behaviour influenced by the Tug-of-war-test,

10. The dogs tolerance to gun shots Tug-of-war play - 2 gun shots are fired at intevals of 10 seconds. The gunman is hidden at a distance of 20 meters. It is desirebale that the dog can whitstand sharp noises in todays noisy society. After this, the dog in a leash with handler/owner passive, and then another 2 shots are fired at intervals of 10 seconds