September 22, 2008 we left for Oslo, to Nordberg Animalclinic, and veterinarian Geir Erik Berge, to get Echuca Dynamite Delinquent Tengel x-rayed for HipDysplasia. The hips looked excellent but we have to wait for the official result from Norwegian Kennel Club. The result came today (october 9 2008) and his HD-results are A (excellent on both hips) 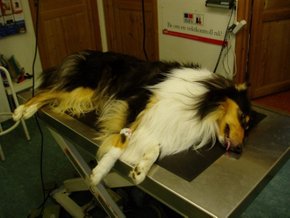 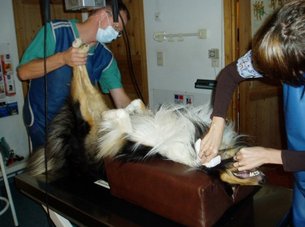 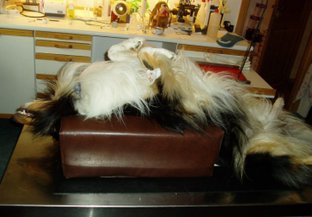 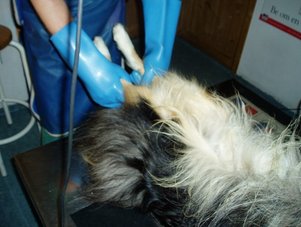 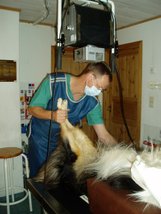 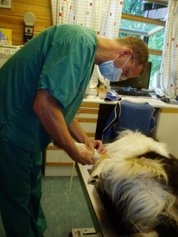 Hip dysplasia literally means an abnormality in the development of the hip joint. It is characterized by a shallow acetabulum (the "cup" of the hip joint) and changes in the shape of the femoral head (the "ball" of the hip joint). These changes may occur due to excessive laxity in the hip joint. Hip dysplasia can exist with or without clinical signs. When dogs exhibit clinical signs of this problem they usually are lame on one or both rear limbs. Severe arthritis can develop as a result of the malformation of the hip joint and this results in pain as the disease progresses. Many young dogs exhibit pain during or shortly after the growth period, often before arthritic changes appear to be present. It is not unusual for this pain to appear to disappear for several years and then to return when arthritic changes become obvious.

Dogs with hip dysplasia appear to be born with normal hips and then to develop the disease later. This has led to a lot of speculation as to the contributing factors which may be involved with this disease. This is an inherited condition, but not all dogs with the genetic tendency will develop clinical signs and the degree of hip dysplasia which develops does not alway seem to correlate well with expectations based on the parent's condition. Multiple genetic factors are involved and environmental factors also play a role in determining the degree of hip dysplasia. Dogs with no genetic predisposition do not develop hip dysplasia.

At present, the strongest link to contributing factors other than genetic predisposition appears to be to rapid growth and weight gain. In a recent study done in Labrador retrievers a significant reduction in the development of clinical hip dysplasia occurred in a group of puppies fed 25% less than a control group which was allowed to eat free choice. It is likely that the laxity in the hip joints is aggravated by the rapid weight gain.

If feeding practices are altered to reduce hip dysplasia in a litter of puppies, it is probably best to use a puppy food and feed smaller quantities than to switch to an adult dog food. The calcium/phosphorous to calorie ratios in adult dog food are such that the puppy will usually end up with higher than desired total calcium or phosphorous intake by eating an adult food. This occurs because more of these foods are necessary to meet the caloric needs of puppies, even when feeding to keep the puppy thin.

If clinical signs of hip dysplasia occur in young dogs, such as lameness, difficulty standing or walking after getting up, decreased activity or a bunny-hop gait, it is often possible to help them medically or surgically. X-ray confirmation of the presence of hip dysplasia prior to treatment is necessary. There are two techniques currently used to detect hip dysplasia, the standard view used in Orthopedic Foundation for Animals (OFA) testing and X-rays (radiographs) utilizing a device to exaggerate joint laxity developed by the University of Pennsylvania Hip Improvement Program (PennHIP). The Penn Hip radiographs appear to be a better method for judging hip dysplasia early in puppies, with one study showing good predictability for hip dysplasia in puppies exhibiting joint laxity at 4 months of age, based on PennHIP radiographs.

Once a determination is made that hip dysplasia is present, a treatment plan is necessary. For dogs that exhibit clinical signs at less than a year of age, aggressive treatment may help alleviate later suffering. In the past a surgery known as a pectineal myotomy was advocated but more recent evidence suggests that it is an ineffective surgical procedure. However, administration of glycosaminoglycans (Adequan Rx) may help to decrease the severity of arthritis that develops later in life. Surgical reconstruction of the hip joint (triple pelvic osteotomy) is helpful if done during the growth stages. For puppies with clinical signs at a young age, this surgery should be strongly considered. It has a high success rate when done at the proper time.

Dogs that exhibit clinical signs after the growth phase require a different approach to treatment. It is necessary to determine if the disorder can be managed by medical treatment enough to keep the dog comfortable. If so, aspirin is probably the best choice for initial medical treatment. Aspirin/codeine combinations, phenylbutazone, glycosaminoglycosans and corticosteroids may be more beneficial or necessary for some dogs. It is important to use appropriate dosages and to monitor the progress of any dog on non-steroidal or steroidal anti-inflammatory medications due to the increased risk of side effects to these medications in dogs. If medical treatment is insufficient then surgical repair is possible.

The best surgical treatment for hip dypslasia is total hip replacement. By removing the damaged acetabulum and femoral head and replacing them with artificial joint components, pain is nearly eliminated. This procedure is expensive but it is very effective and should be the first choice for treatment of severe hip dyplasia whenever possible. In some cases, this surgery may be beyond a pet owner's financial resources. An alternative surgery is femoral head ostectomy. In this procedure, the femoral head (ball part of the hip joint) is simply removed. This eliminates most of the bone to bone contact and can reduce the pain substantially. Not all dogs do well following FHO surgery and it should be considered a clear "second choice".

Hip dysplasia may not ever be eliminated by programs designed to detect it early unless some effort is made to publish the results of diagnostic tests such as the OFA evaluation or PennHIP evaluations, openly. This is the only way that breeders will be able to tell for certain what the problems have been with hip dysplasia in a dog's ancestry.

When an older dog is exhibiting signs of pain associated with this condition it is often possible to help them dramatically through medication and simple steps like providing a warm bed or warm spot to rest during the day. There is no advantage to pain and steps should be taken to ensure that the older dog is not in pain. Regular exercise can be very helpful and weight loss can have dramatic effects on the amount of discomfort a dog experiences.

Working with your vet to come to the best solution for your dog and your situation will enable you and your dog to enjoy life to its fullest, despite the presence of hip dysplasia.