Published by The American Collie Club

Dogs, like people, are subject to a large number of

be of concern to all breeders. The most common is

The Collie Eye Anomaly (CEA) - This syndrome, (a group of conditions that appear in conjunction with each other) is present prior to birth. It can be diagnosed by a veterinary ophthalmologist when a puppy is just a few weeks old. Drops are given to dilate the pupil and the interior of the eye is examined with an ophthalmoscope. The eye is then graded as "clear", not affected, or as affected, showing signs of the syndrome listed below. (More than one term is often given as there is no uniform nomenclature used by the doctors.)

Staphyloma, Coloboma, Ectasia - While not completely synonymous, these terms all refer to a cupping or bulging in the eyeball usually in the area of the optic nerve.

Choroidal Hypoplasia, Chorioretinal Change - These terms refer to abnormalities in the coloring or pigmentation of the choroid or central layer of the eye's lining. There are variations even in normal eyes. These correspond somewhat to a dog's coat color. Thus it is often difficult to judge the pigment in a blue merle's eyes as it is diluted along with their coat color.

Vascular Disease, Tortuous Blood Vessels - Defects in the vessels of the eye which are responsible for its blood supply or "nourishment". These may be dilated or malformed.

Retinal Detachment - Loosening or separation of the inmost, or retinal, layer from the wall of the eye. This may involve a tiny area or the entire retina. The latter is termed as a complete detachment, the result being blindness in the eye.

Can the Collie's eyes become worse? Might he later go blind? The basic answer is "no" as the CEA is present prior to birth. However, a dog born with a severe Staphyloma or with Vascular Disease may later suffer loss of sight if a detachment or severe hemorrhage occur. The majority of dogs which are slightly affected have perfectly adequate eyesight during their lives. (Even a dog with one blind eye will cope perfectly with his surroundings.) It should be noted that CEA can exhibit such subtle variations that among mildly affected dogs we find differences of opinion among experts as to which are clear or not. What have breeders done to improve Collie Eye? Because CEA has involved so much of the breed, eradication has had to be slow in order to keep other desirable qualities. Even among dogs that examine clear, most are carriers for the condition. (There genes for this condition are "hidden" or recessive.) Such dogs can transmit the genes to some of its offspring. Other conditions which are not part of the syndrome should be mentioned:

Hypoplasia Of The Optic Nerve - An undersized nerve, noted where it enters the back of the eyeball. In extreme cases, this can cause blindness.

Corneal Dystrophy - This condition comes on when a dog is mature, often during stress. Opaque spots centrally on the surface of the cornea. (It is often confused with cataracts which occur in the lens.)

Microthalmia - This means that the dog is born with an abnormally small eyeball.

Progressive Retinal Atrophy (PRA) - Unlike CEA, this disease occurs in many breeds of dogs. Once thought to be rare in Collies, it became an increasing menace. PRA is the term which describes retinal degeneration resulting in total blindness in both eyes. Generalized PRA has proven to be a simple recessive in all breeds studied. This means that even though the condition is not present at birth, both parents must have been involved either as carriers or been affected. Early signs of the problem may be noticed by the owner as "night blindness". (The dog has trouble seeing in dim light.) An expert may detect first signs in the eye at six months or younger. We have pointed out that puppies should be examined for CEA as young as possible. Then if there is any doubt as to the dogs in their background they should be rechecked at about six months for PRA. It should be mentioned that there is an expensive test available at some large university veterinary schools known as an ERG, (or Electroretinogram), whereby a puppy is anesthetized and tested even younger for incipient PRA. This is recommended where there is a definite suspicion that the dog may be affected, such as in the case of test-breeding to a blind animal. (A second opinion is usually recommended to confirm any diagnosis of PRA by either an ERG or ophthalmologic exam.) Even though a dog tests clear of PRA, if his pedigree is at all questionable, he should be neutered, or if his quality warrants it, he should be test-bred before used for breeding.

Distichaisis is a hereditary condition where eyelashes grow toward the eyes instead of away. This can be very uncomfortable even painful for the dog. This can require surgical treatment before severe damage to the cornea occurs.

No dog should be used for breeding until examined and found to be above the examiner's standard. The most accurate readings can be made when a puppy is young. Minor symptoms may become in apparent later on. Such cases are referred to as "Go Normals", but will produce as affected. What pattern of heredity is involved? Most of the specialists agree that Choroidal Hypoplasia is carried as a simple recessive. For a dog to show symptoms, both parents, even if they show no signs themselves, must carry a gene for the condition. Evidence exists that some other parts of the syndrome are handed down differently. Staphyloma, for instance, rarely occurs except in the presence of Choroidal Hypoplasia. Dogs recommended for breeding will vary according to the standard set by the individual doctor. The ideal, of course, is to eliminate all but the clear, non-carriers, from the breed. 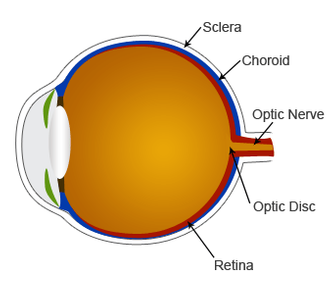 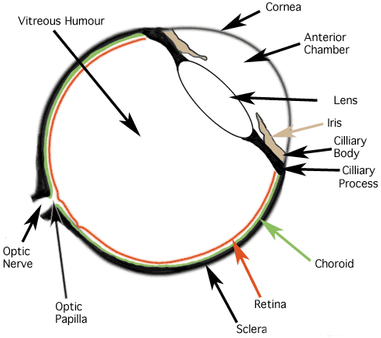 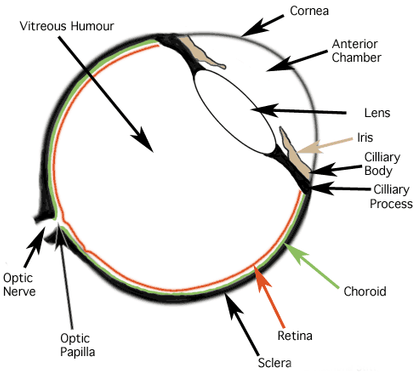 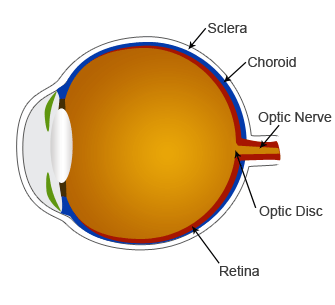